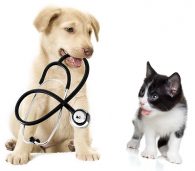 Neville is a 13 year old domestic short hair cat who came to see us at Southern Animal Health regarding weight loss (despite having a good appetite). The main differentials for this common feline complaint are diabetes and hyperthyroidism (among a few other rare concerns). Blood tests confirmed Neville was indeed a hyperthyroid cat.

Hyperthyroidism occurs when the thyroid gland produces too much thyroxine, (a hormone that controls our metabolic rate). When we have too much, we go into hyper-drive with the cells working over time burning up energy. Hence we have hungry patients, but with weight loss. Eventually, patients either become ill due to severe weight loss, or, they can go into heart failure which can be impossible to come back from! This is the reason that control is of the utmost importance. There are three main ways to treat (or cure) hyperthyroidism.

We started Neville on one particular medication with the aim to initially gain control of his symptoms however, this is where we encountered a problem. Although his blood tests had revealed the hyperthyroid problem, Neville also had very high liver enzymes. Although this is not uncommon to be secondary to hyperthyroidism, one of the enzymes in particular, called ALT, was very high. Higher than you would usually suspect from just being secondary to hyperthyroidism. Hence there was a concern Neville may also have overt liver disease.

The initial course of action was to just treat the hyperthyroidism and see if the liver enzymes came back to normal. Neville unfortunately did not handle the initial medications for hyperthyroidism well, becoming lethargic and going off his food. This can be a reaction to medication for some patients but our dilemma was: “Is it a reaction to the medication, or is it liver disease getting worse?”. Initially, we stopped the medication – but not before repeat blood tests. Repeat blood tests after just a short period of medication actually showed the thyroid level under good control, however the liver enzymes were still very high. Neville improved since being taken off the hyperthyroid medication so within just a few days, we knew he was likely reacting to the medication. But where to from here? We could try a lower dose, alternative medications, or even long term curative procedures for hyperthyroidism, but we were still left not knowing if the liver was about to give us major concerns.

As with all liver disease, tests upon tests are often unrewarding. We recommend going straight to biopsies via exploratory surgery as being the safest and most efficient way of getting a diagnosis. Neville went to surgery, biopsies were obtained and pathology revealed that the changes were consistent with excess iron in the diet!

What is interesting about veterinary medicine, is that there is always something new to come across no matter how long a career you have had. With over 100 years combined experience from our incumbent veterinary team, not once had any of our veterinarians come across this! Talking at length to the pathologist – who needed special stains and second opinions themselves in order to find the diagnosis, (being so rare), it was decided the excess iron must be coming from Neville’s current diet. So Neville’s whole diet took a change of direction! At least the condition itself is not initially serious, but long term it is preferential to reverse the process.

In the meantime, we needed to find a solution to Neville’s reaction to the original medication for hyperthyroidism. At least with his liver not being of short term concern we could go back to solving this problem. We started a different medication at half the normal dose as our aim was to initially see if Neville also reacted to this medication, and then to slowly increase it if we could to gain control of his thyroid levels.

Neville was tolerating the new drug well and to our surprise when doing follow up blood tests, his thyroid level was well controlled at the half dose! Now we had good news at last for Neville. Liver under control, thyroid getting under control with a well tolerated alternative low dose medication, and Neville enjoying life!

For both hyperthyroidism and liver disease feel free to explore our website further for explanations n these diseases and how best to gain control.