Injury
Partial or complete rupture of the cranial (anterior) cruciate ligament is a very common injury in dogs and also occurs in cats. Rupture causes instability of the stifle (knee) joints. This also causes acute pain and over time leads to degenerative joint disease or osteoarthritis. Quite commonly, there is also a tearing of the meniscus (cartilage) within the joint which can occur either at the time of rupture, or some time into the future, especially if not repaired.

Diagnosis
Diagnosis may be possible at your pets initial consultation. However some patients are sore and nervous and tense the muscles of the leg, making it impossible to feel the instability in the joint. For these patients sedation is needed to allow our veterinarian to determine whether cruciate injury has occurred. This is very important because if cruciate injury is suspected, injury cannot be ruled out unless assessed under sedation.

Treatment
Without surgical repair, dogs with ACL lameness will develop degeneration and arthritis within the joint over time, due to the femur and the tibia shearing against each other with each step. Surgery is therefore recommended for any dog with ACL damage.

There are two main techniques for repairing cruciate injury:

SAH is one of the few general practices who offer four different techniques when it comes to cranial cruciate repair. Two stabilisation and two levelling procedures. Before going into greater detail of these four techniques, it is important to understand the anatomy of the knee, which will help explain which of the techniques is best suited to your dog. A human knee is a horizontal level joint. Hence when a human ruptures their cruciate ligament (a very common injury), unless the patient is active (I.e: a sportsperson), it is not necessarily vital to stabilise the joint because every time they take a step, there is no shearing force causing excessive movement of the joint. For athletes however, repair is most important.

nd cats knee is not a horizontal level joint. The top of the tibial bone is angled, usually between 15 to 40 degrees. If the cranial cruciate is ruptured, this means that every time they take a simple step, there is a shearing force that slides the femoral bone down in relation to the top of the tibial bone that forms the joint. It’s this shearing force that causes ongoing damage, pain and arthritic change over time.

Hence for our pets, when rupturing their cruciate ligament, we need to either stabilise the joint or turn the sloping angle into a horizontal angle like a human joint.

This is the basis of the two types of techniques. We can now describe these in more detail:

excessive movement with each step. Traditionally, the most basic technique is called a DeAngelis technique. This utilises a 100 pound hard line fishing nylon that can be threaded around the joint in various ways. This is the original technique that was used for all cruciate stabilisation procedures, and still is the most cost effective technique for patients up to 15 kg’s

A far superior technique that we have been utilising for some years now is called a Tightrope procedure. This is also a stabilisation technique, similar to DeAngelis in that it stabilises the joint, but uses a titanium-kevlar implant that anchors to the tibia and fibula in a much more secure manner than DeAngelis, also more closely approximating the actual angle of the cruciate ligament itself. This results in faster, better recovery, with less chance of complications and less discomfort to the patient. This is the ideal technique for all patients up to 20kg’s, but is also a reasonable cost effective option for larger dogs if costs may prohibit the superior levelling techniques.

2) Joint levelling techniques:
Levelling techniques aim to change the angle of the tibial plateau (the top of the tibial bone) from it’s normal angle of between 15%-40%, to a more horizontal level, similar to a human knee, such that the normal shearing forces with each step are eliminated, resulting in pain free stability that does not cause ongoing arthritis. These techniques are superior for any patient over 20kg’s where the stabilisation techniques (especially DeAngelis), may not be strong enough to withstand these forces.

The two levelling techniques that SAH offers are: 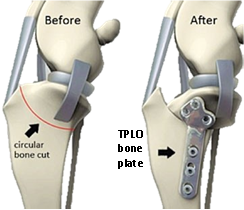 Both achieve a horizontal tibial plateau, however TWO achieves this via a wedge of bone removed from the tibia which is then re-plated, versus the TPLO which does not remove a wedge of bone, but cuts a circular plane through the Tibia allowing the top of the tibia to rotate around to the desired angle before being re-plated. A TPLO is the absolute Gold Standard of cranial cruciate repair. The advantage of the TWO technique is that it is cheaper and still a very good option, but TPLO is superior.

The long term outcome for most patients is excellent!

So Which Procedure is Best for my Dog?
Click here for more information from our advanced surgeon Dr Karin Davids