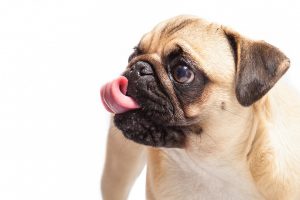 If you own a Pug, Boston Terrier, Pekingese, Boxer, French Bulldog, British Bulldog, Shih Tzu or any one of the other breeds with pushed in or short faces, you should become familiar with Brachycephalic obstructive airway syndrome (BOAS). The word ‘Brachycephalic’ comes from Greek roots ‘brachy’, meaning short and ‘cephalic’, meaning head.

Brachycephalic dogs have been bred to have a normal lower jaw in proportion to their body size, but a compressed upper jaw. In producing this cosmetic appearance, we have compromised the respiratory system in these animals. Brachycephalic breeds make a lot of snorting respiratory sounds simply because of the way their throats and faces are shaped. These sounds are generated from a combination of several anatomic deformities that are described below:

Stenotic Nares – Narrowed Nostrils
The brachycephalic dog’s respiratory passage begins with very small, often slit-like, nasal openings for breathing. This leads to a great deal of open-mouth breathing and panting as the nasal breathing route is limited by its small opening. Stenotic nares can be surgically corrected after five months of age.

Enlarged Tongue (Macroglossa)
The tongue of the brachycephalic dog can be particularly thick and large which contributes to the overall obstruction.

Elongated Soft Palate
It is difficult to fit the soft tissues of the canine mouth and throat into the brachycephalic’s short face. As a result, the soft palate which separates the nasal passage from the oral cavity, flaps loosely down into the throat creating snorting sounds. Virtually all brachycephalics suffer from this. Excess barking or panting may lead to swelling in the throat that can in turn, lead to severe respiratory distress. Again, the soft palate can be surgically trimmed.

Everted Laryngeal Saccules
The normal larynx has two small pockets called ventricles or saccules. When a dog has increased effort to breathe, over time these little pockets will actually turn inside out and can obstruct the throat. This condition can be corrected surgically however, in many cases it can be prevented by early surgical correction of the nares and/or elongated soft palate.

Brachycephalic obstructive airway syndrome can be progressive if it is not corrected at an early stage. Severely affected dogs can experience collapse of the larynx and require a permanent tracheotomy (a hole in the throat for breathing).

Gastrointestinal Tract and Brachycephalic Airway Obstruction
There appears to be several stomach and swallowing issues that are caused by the constant negative pressure of upper airway obstruction. The oesophagus (the tube that moves swallowed food from the throat to the stomach) experiences reflux of stomach contents. This reflux generates pain and inflammation. Compounding this problem is retention of food in the stomach for prolonged periods. Pooling of food in the stomach creates a sensation of nausea and increases the potential for vomiting and/or stomach acid reflux. Medications can be used to manage these issues (should they arise); however, surgical correction of the respiratory obstruction generally leads to great improvement of the gastrointestinal symptoms.

At Southern Animal Health our advanced surgeon Dr. Karin David’s is capable of correcting all these upper airway defects for your pet. Due to the progressive nature of BOAS, we recommend correction sooner rather than later.  These surgical corrections can be done as early as 8-12 months of age under the same general anaesthetic as desexing.

All patients should be assessed at desexing and most will benefit from nares and soft palate resection at this time. When done early, laryngeal saccules rarely need to be removed.

If not done at desexing, surgery can still be performed in later years with good results, but the results are never as positive long term compared to early correction at desexing. So please consider and discuss these corrective surgeries with us before desexing. Early correction is most effective and cost efficient, leading to the patient having a vastly improved life due to easier breathing.

If any of the above procedures are done at the same time as desexing, the cost is far cheaper (and long term benefits far greater). Done as a separate surgery later in life, the base cost of soft palate resection is far higher with nares and laryngeal saccules (likely needing to be done after 2 years of age).

Post-operative Care:
–          Feed soft food only for the first 48 hours after surgery
–          On rare occasions the ‘snoring’ and ‘snorting ‘ may seem worse for a day or two post op due to swelling at the back of the throat, but becomes vastly improved soon after.
–          Medications: Your dog will need to take anti-inflammatories and antibiotics for 5-7 days post surgery.

Complications of Surgery:
–          Other than the extremely rare usual complications of all surgery, such as bleeding or infection, on rare occasions we may need to do a second resection at a later time.

Overall the surgery is very successful and the risk of complications is extremely low. Thus there is an excellent chance of improving your dog’s 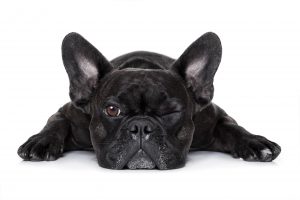 respiratory difficulties, exercise intolerance and overall quality of life. Early correction is the key to a better long term result.